Beauty and the Beast

A couple of weeks ago, my parents and I adopted 2 cats from the pound. One was about 10 months old the other was about 4 months old. They have come to be nicknamed Beauty and the Beast. The 10 month old looks like a regular black cat, but if you get closer, she's acutally a dark chocolate color with a white patch on her chest. She's a beautiful cat. So she's Beauty. The other cat is a terror! She looooooooves people and hates to be alone. She's always right at your feet, but as soon as you pick her up, she starts biting and clawing at you. So she's the Beast. Her favorite hobby is to get into everything. I'm pretty sure the phrase "curiosity killed the cat" was coined because of her. If a door or cupboard is open, she gets in (this includes when the dishwasher is open). And she's so fast that half the time you don't notice until you hear her meowing to get out. Her lastest hobby is trying to climb door frames. She runs at the full speed, manages to jump up and claw up abotu half way before she slides all the way down. It's hilarious to watch. So here they are, Beauty and the Beast... 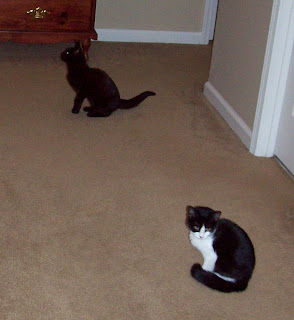 Here they are waiting for my mom to come out of her room. (Like I said, they love people and if they know where you are, they will wait for you.) 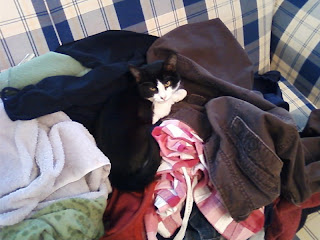 Here's Gabby, aka the Beast, her first day home. She settled in nicely and made herself to home in a clean pile of laundry. Her name is Gabby because she loves to talk. 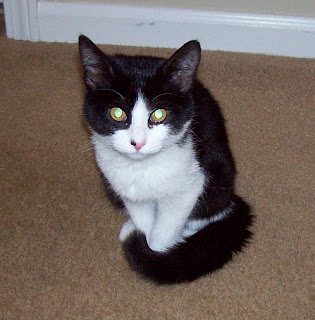 Her eyes aren't really that creepy, just the way the flash reflected in them. 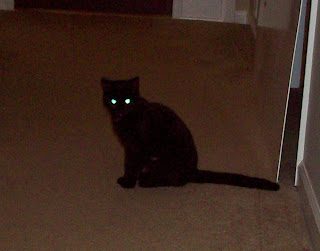 Here's Ashes,aka Beauty. Her eyes aren't that creepy either. I tried to make them less creepy, but the photo editing program on my computer only fixes red eye if the eyes are actually red. Who knew computers were so smart? 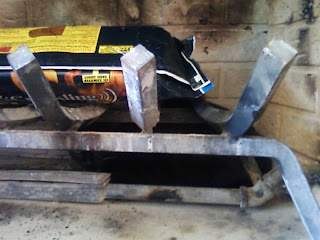 And this is why Ashes' name is Ashes. We brought her home from the pound and she made herself at home in the fireplace. All the doors were closed so we knew she had to be in the living room or kitchen. If you're looking for a lost cat that has her coloring, don't just glance into the fireplace because they'll blend right in and you'll keep looking.

You need to take pictures of the one in cupboards and stuff. What a silly kitty.

Caitlin
I was born in Maine and moved to Georgia when I was 8. From 2005 to 2009, I was in Utah going to school. I'm now back in Georgia, looking for a job and hopefully going back to school this summer.