Well, it's time to say good-bye to my job and find a new one. It's a long story about why I'm leaving. We all know I've never liked the company I work for, but I've always loved the residents I work with and they're the reason I've never been able to pull myself away. However, the company finally did something to make me so angry that I put in my 2 weeks notice yesterday. Basically, they took away my hours and I'm being replaced by a new girl. The resignation form told me to be candid in my answers as to why I'm leaving. And I was definitely candid. Some of the things I wrote were...

In response to whether or not I will return in the future: "This is a horrible company and after the way I've been treated, there is little to no chance that I will ever return."
After having to rate my supervisor in different categories: "(My boss) is awesome. The fair mark is no fault of her own but the company's failure to recognize the hard work of its (caregivers). Without us, the company is nothing."
Commenting about my overall ratings of the company: "The pay sucks for everything that is required of (caregivers) and I never thought that departments heads would treat their employees so terribly."
I held nothing back. My boss brought my papers to the department head meeting today. 2 of them called me later to apologize. I basically told them thank you for calling and I appreciate the apologies. Part of me feels bad for what I wrote but another part of me feels invigorated for actually saying what was on my mind.
But I do feel absolutely horrible. One of my previous co-workers quit because of me. Well, it wasn't really because of me, but she was basically in the same situation I was. At the beginning of the summer, I went back to work full time so I could save up some money while I was only taking a couple classes. I found out today that this person was told she couldn't have her hours anymore because they had 3 full time staff in the afternoon. To this person, you know who you are, I am so very sorry and you know I would never have done that one purpose.
I do have some good news. I went to mutual with my ladies a couple of weeks ago and they had a luau! They had Polynesian dancers and it was so cool. I took a couple of pictures with my phone. They aren't the best but I really enjoyed the dances. The greatest part was when the emcee introduced her husband as Johnny Lingo and told us her pair 12 cows for her! 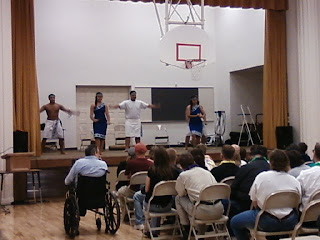 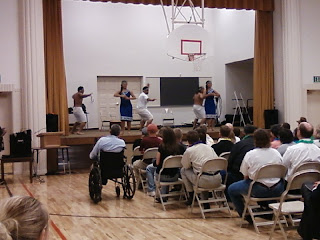 Caitlin
I was born in Maine and moved to Georgia when I was 8. From 2005 to 2009, I was in Utah going to school. I'm now back in Georgia, looking for a job and hopefully going back to school this summer.